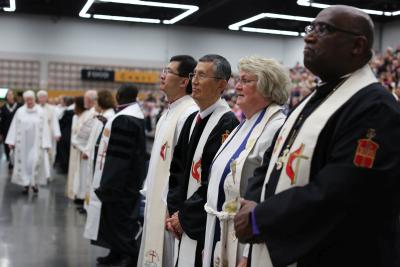 A few years ago, during a conference organised by a Methodist Church overseas, I was asked by a member of the host committee what I hoped to learn. Rather impertinently (upon hindsight), I replied that I wanted to learn how not to end up like them. The church in that country had been seeing great decline in membership over several decades.

While observing the proceedings during the recently-concluded United Methodist Church (UMC) General Conference (GC) 2016 in Portland, Oregon, that earlier incident came to mind. Membership decline is significant in UMC churches across the USA and Northern Europe. The opposite is true of UMC churches in Africa and Asia.

Hence I see a storm brewing, with the cold winds that brought decline meeting the warm winds of growth. In the words of an African delegate, it is the clash of cultural Christianity and biblical Christianity. Over the past few quadrennial conferences, United Methodists in Africa and Asia have seen that changes sought by the American and European Methodists seemed more to conform to Western culture than following biblical principles.

The lightning and thunder of the approaching “perfect storm” were seen and felt during the conference. Close to a thousand petitions were deliberated by legislative committees, dealing mainly with the UMC position on homosexuality and its related issues.  An attempt to diffuse the storm by moving to divide the UMC into three separate Conferences (liberal, conservative, and one other) was defeated.

The deadlock led the Conference to turn to the Council of Bishops to form a commission to study the issue and make proposals to the GC, either as a specially-convened event, or at the end of the quadrennium. 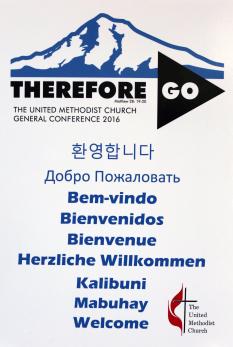 In the midst of these unresolved issues, however, the UMC GC made two significant decisions. One was to withdraw its membership from the Religious Coalition for Reproductive Choice (RCRC), a pro-abortion agency of which the UMC was a founding member. The other was to encourage boards and agencies to divest from an anti-Israel coalition, a move which was the exact opposite of a proposal from its General Board of Church and Society.

As an observer present at the GC, I saw the diversity of the UMC. Audio headset translations of proceedings were available in Swahili, Spanish, Tagalog, French, German and Russian, representing the various nationalities of its worldwide member churches. Then there is the theological diversity. The GC was a glorious display of the grace of God upon His church. It would take a great persistent push from divergent quarters of the church to cause God to eventually give them up to their own desires. The Lord and Head of His Church does not give up so easily.

At one point during the proceedings, it occurred to me that the spirit of lawlessness was creeping into the church. There were rules to follow during plenary and legislative committee meetings. But rule changes were proposed that seemed to be an attempt to manipulate the system to get one’s way. Then there were the public protests with chants and singing that interrupted the proceedings.