Days of Darkness, Days of Light 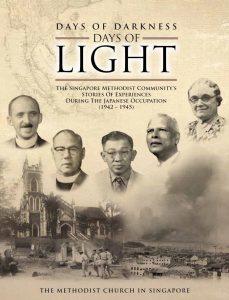 A must-read especially for Methodists, Days of Darkness, Days of Light is specially compiled to tell an important story. It is about the Singapore Methodist community’s experience during the Japanese Occupation in Singapore from February 1942 to September 1945.

The book (250 pages) is a first endeavour at a historical compilation by The Methodist Church in Singapore giving voice to the collective memory of the war by three groups of people.

The first group were the missionaries who chose to stay behind to be alongside their affected flock, even though they had sufficient time to evacuate to safety. Two of these missionaries died during internment in the Sime Road Camp just before the war ended. Their stories should not be forgotten.

The second group were the local church leaders caught in the thick of the war and who grappled with directing church life under the instructions of the Director of Religion under the Japanese Military Administration. They faced various issues such as shortage of funds, ceased and bombed-out church and school buildings, restrictions in holding worship services and incidents of disloyalties. “There is no triumph for evil” declared Rev S.M. Thevathasan after the war. He was the person put in charge of the church after the missionaries were interned, and indeed, the church pulled through with the spirit of Christian charity, co-operation and teamwork as well as the strength and support of the Methodist movement from her mother church in the U.S.

In the third part of the book, we obtained stories and recollections from present-day members, some of whom are still living and are in their eighties and nineties. Some were in their early or late teens, while some were young adults when war broke out. Most remember details of how the war affected their lives and that of their families.

Sources of the stories include autobiographies and contributions, letters, reports, and oral history interviews.

This book about the experience of the war-time generation is written for the present-time generation of Singaporean Christians and especially the Methodist community. It is hoped that these stories of the dark years will encourage faith and provide lessons for living, and to show that although those were days of darkness, the Light of God still prevail (1 John 1:5b).

To order, please complete the order form and mail it to the above-stated address with your crossed cheque for the correct amount make payable to ‘The Methodist Church in Singapore’.