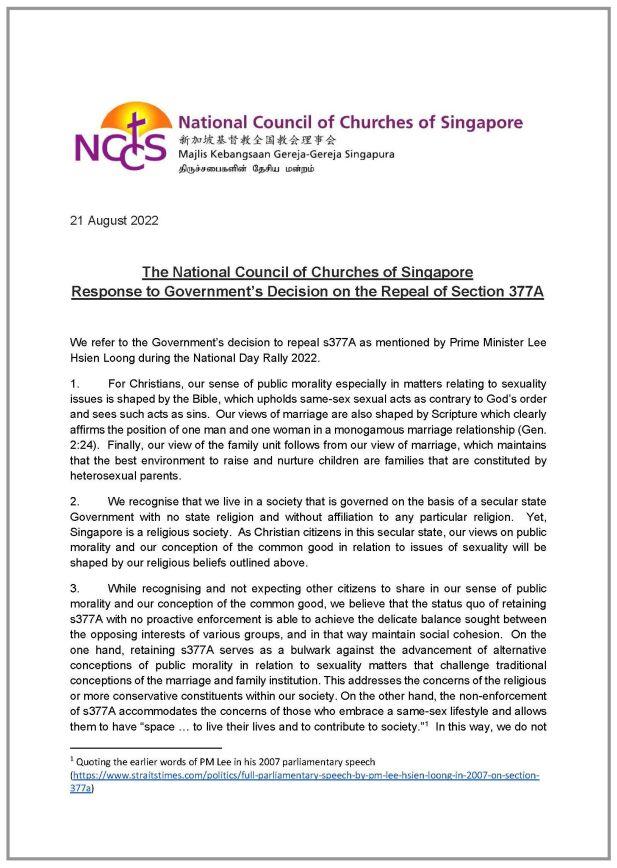 We refer to the Government’s decision to repeal s377A as mentioned by Prime Minister Lee Hsien Loong during the National Day Rally 2022.

1. For Christians, our sense of public morality especially in matters relating to sexuality issues is shaped by the Bible, which upholds same-sex sexual acts as contrary to God’s order and sees such acts as sins. Our views of marriage are also shaped by Scripture which clearly affirms the position of one man and one woman in a monogamous marriage relationship (Gen. 2:24). Finally, our view of the family unit follows from our view of marriage, which maintains that the best environment to raise and nurture children are families that are constituted by heterosexual parents.

2. We recognise that we live in a society that is governed on the basis of a secular state Government with no state religion and without affiliation to any particular religion. Yet, Singapore is a religious society. As Christian citizens in this secular state, our views on public morality and our conception of the common good in relation to issues of sexuality will be shaped by our religious beliefs outlined above.

3. While recognising and not expecting other citizens to share in our sense of public morality and our conception of the common good, we believe that the status quo of retaining s377A with no proactive enforcement is able to achieve the delicate balance sought between the opposing interests of various groups, and in that way maintain social cohesion. On the one hand, retaining s377A serves as a bulwark against the advancement of alternative conceptions of public morality in relation to sexuality matters that challenge traditional conceptions of the marriage and family institution. This addresses the concerns of the religious or more conservative constituents within our society. On the other hand, the non-enforcement of s377A accommodates the concerns of those who embrace a same-sex lifestyle and allows them to have “space … to live their lives and to contribute to society.”1 In this way, we do not see the need for a repeal, and view the retention but non-enforcement of s377A as still able to achieve the goal of fostering Singapore to be “an inclusive society, where mutual respect and tolerance for different views and practices are paramount.”

4. Nonetheless, we take heed of the Government’s mention that in a future court challenge, there is a significant risk of s377A being struck down on the grounds that it breaches the Equal Protection provision in the Constitution, and the need for the Government to take this point into serious consideration.3 We hence acquiesce in the Government’s decision to repeal s377A.

We further appreciate the Government’s assurance that, in repealing s377A, it will uphold and safeguard the institution of marriage. In this regard, we appeal to the government to directly express a definition of marriage in the Constitution and declare that only such marriages will be recognized in Singapore. In our view, this move achieves a more robust safeguard than the alternative of including a constitutional provision that references the relevant provisions of the Women’s Charter or Interpretation Act and shields them from constitutional challenge. Either
way, we recognize that the Government’s move serves to replace the symbolic role of s377A as a moral signifier in indicating that our society’s laws, policies, values and mores remain strongly in support of marriage as a heterosexual union and the family consisting of heterosexual parents as the basic unit of society.

In keeping to this particular societal conceptualization of marriage and the family unit, we see no basis for any further liberalization of policies or content for the downstream government institutions or statutory boards in light of the repeal of s377A (e.g. public housing, education, adoption rules, advertising standards, film classification etc. as mentioned by PM Lee).

5. While agreeing that the Government’s move in safeguarding the current legal position on marriage prevents the position from being challenged in the courts, we are concerned that the repeal of s377A will lead to a beginning and intensification of the contention and advocacy for domestic partnership arrangements or civil unions to be instituted and legalized in Singapore, on the same argument of guaranteeing constitutional rights for all citizens regardless of their sexual orientation.4 We seek the Government’s further clarification on this matter.

6. Finally, with the repeal of s377A, we seek the Government’s assurance that the religious freedom of churches will be protected as we continue to teach against same-sex sexual acts and highlight such acts, along with other sexual acts like adultery, fornication, or premarital sex, as sins that go against the clear teaching of the Bible. Pastors, Christian teachers and workers who uphold the clear teaching of Scripture on this matter should be protected from charges of “hate speech” and the like.

To that end, we urge the Government to (1) limit hate speech laws to incitement to use of force or violence, and (2) defend a robust interpretation of religious freedom under the provision of the Constitution (Article 15(1)). Pastors and counselors offering a distinctively Christian approach in their counseling should also be protected and free to choose from a variety of counseling or therapy strategies, and not be compelled to adopt solely “LGBTQ+-affirming-only” strategies.

Lastly, we are concerned that with the repeal of s377A, there will be an intensification of the celebration of LGBTQ+ culture especially in companies or corporations that support LGBTQ+ activism. Christian individuals in such situations will face an even greater amount of pressure (as compared to the situation where s377A is retained) to support or participate in the LGBTQ+ activism, or risk facing “reverse discrimination.”

Therefore, even as the Government is working toward enshrining in law the Tripartite Guidelines on Fair Employment Practices, we urge the Government to make provisions to allow individuals to report cases of “reverse discrimination” in relation to not supporting LGBTQ+ activism that they might have observed or experienced at the workplace.

7. In conclusion, we recognise that public views on sexuality matters remain contentious and highly sensitive, and they have a potential to divide society. In order that we remain as one people, we call on the church to maintain the social cohesion that we have enjoyed in Singapore throughout the decades, even as our views on this issue may differ.

Most of all, we call on all our pastors, Christian teachers and workers to uphold the clear truth of Scripture on this matter, but yet to articulate and minister this truth with love and compassion, as our Lord himself did. May we, as God’s church, the body of Christ, affirm the dignity of every human person created in his image. May we be that refuge, journeying alongside those who experience same-sex attraction and who desire to live in obedience to God, which includes conforming ourselves to his good word on sexuality.