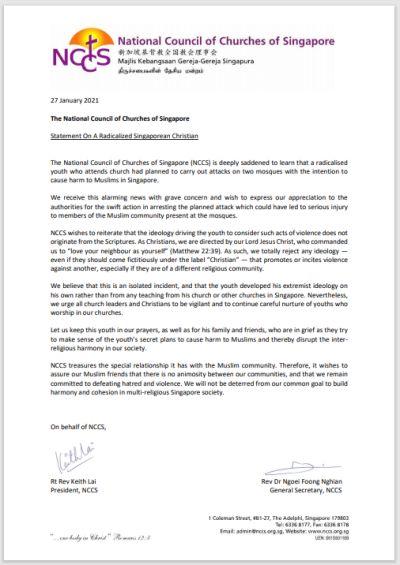 The National Council of Churches of Singapore (NCCS) is deeply saddened to learn that a radicalised youth who attends church had planned to carry out attacks on two mosques with the intention to cause harm to Muslims in Singapore.

We receive this alarming news with grave concern and wish to express our appreciation to the authorities for the swift action in arresting the planned attack which could have led to serious injury to members of the Muslim community present at the mosques.

NCCS wishes to reiterate that the ideology driving the youth to consider such acts of violence does not originate from the Scriptures. As Christians, we are directed by our Lord Jesus Christ, who commanded us to “love your neighbour as yourself” (Matthew 22:39). As such, we totally reject any ideology — even if they should come fictitiously under the label “Christian” — that promotes or incites violence against another, especially if they are of a different religious community.

We believe that this is an isolated incident, and that the youth developed his extremist ideology on his own rather than from any teaching from his church or other churches in Singapore. Nevertheless, we urge all church leaders and Christians to be vigilant and to continue careful nurture of youths who worship in our churches.

Let us keep this youth in our prayers, as well as for his family and friends, who are in grief as they try to make sense of the youth’s secret plans to cause harm to Muslims and thereby disrupt the inter-religious harmony in our society.

NCCS treasures the special relationship it has with the Muslim community. Therefore, it wishes to assure our Muslim friends that there is no animosity between our communities, and that we remain committed to defeating hatred and violence. We will not be deterred from our common goal to build harmony and cohesion in multi-religious Singapore society.