The God who became a Baby 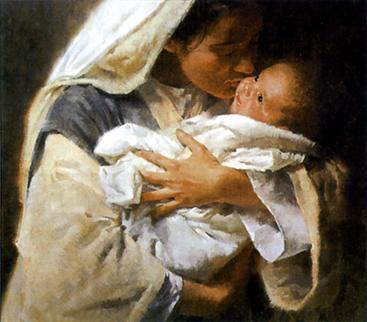 A LEADER of the early church insisted, “I cannot see how a baby can be the God who created the heavens and the earth.” He was referring to Jesus who was born in Bethlehem. Later this church leader went on to relentlessly pursue his line of thinking and became responsible for a heresy.

The Christmas birth of Jesus, and the identity of this new-born child has stretched the minds and imagination of many. The depth of mystery, as to who this Christmas child is, has been with us for two millennia. If we get it wrong, we end with heresy. But more importantly, how we view Bethlehem’s most celebrated child will determine whether we experience God’s salvation or not. Our salvation depends on what we make of Mary’s child.

There were many debates about this matter in the early church. Was Jesus God when He was born? If He was God, then how could He be a man? These puzzling questions occupied the best of ancient minds.

Several answers were offered, many of them heretical, to solve the puzzle. Essentially, there were three sorts of answers:

The first two of these three answers were clearly heretical and can be dismissed quite easily. But let us look at them briefly.

Was Jesus God but not man? Some Gnostics, called Docetists, in the early centuries of the first millennium insisted that Jesus only appeared to be a man and that His physical body was nothing more than an illusion, a sort of divine sleight of hand. However, Scripture shows clearly that this view is grossly off the mark.

John, the disciple of Jesus, referring to Jesus, wrote, “That which was from the beginning, which we have heard, which we have seen with our eyes, which we have looked at and our hands have touched — this we proclaim concerning the Word of life.” (1 Jn. 1:1). He also wrote that the Word (Logos), who was God, became flesh. It cannot be any clearer. Hence, John also warned that “Every spirit that acknowledges that Jesus Christ has come in the flesh is from God, but every spirit that does not acknowledge Jesus is not from God.” (1 Jn 4:2-3). Jesus was both God and man — the Docetists were wrong.

Was Jesus man and not God? The Ebionites represented this view that saw Jesus as nothing more than a great human teacher. All through history, some have chosen to see Jesus this way. Here again, Scripture clearly debunks such views. We have already seen how John describes Jesus as the eternal Word who is God Himself (Jn 1:1).

Immediately after his dramatic conversion, Saul-Paul began preaching that Jesus is the Son of God (Acts 9:20). Even doubting Thomas, when encountered by the risen Jesus, addressed Jesus as “My Lord and my God!” (Jn 20:28). In fact, Jesus is referred to as “God” at least seven times in the New Testament.

One answer was that Jesus was a combination of two persons — one human and one divine. The Nestorians insisted that this was the case and were considered heretical. For them, Jesus had two natures that were connected morally but remained separate. There was a group with similar ideas that claimed that Jesus was born a man but that because of His exemplary character, the divine element was joined to His humanity at His baptism. And that explains what He taught and did in His life. Just before His crucifixion, the divine left Jesus and He died as a man (for God cannot die). This was also ruled out as heresy by the church.

Other formulae, e.g., one person, one fused nature, were also propagated. Taking a clear biblical stand, the early church formulated the orthodox biblical view of Jesus: He was one Person with two natures (divine and human). This meant that from His conception to His resurrection, Jesus was fully man and fully God.

That this biblical view was of critical importance was demonstrated in the debates about a word used in the early church — theotokos (bearer of God). This title was given to Mary, mother of Jesus. Some opposed this but those who defended it insisted that the Jesus who was in Mary’s womb and who was born that first Christmas was in fact fully God. To deny Mary the title of theotokos is to deny that the new-born baby of Bethlehem was fully God.

But why are all these doctrinal debates and discussions important? Can’t we simply celebrate Christmas? To the early church, how we view Jesus was critically important because it has to do with our salvation. How, you may ask.

Perhaps, the answer given by Athanasius would shed some light. He wrote of Jesus in his Incarnation of the Word of God, “He has been manifested in a human body for this reason only, out of the love and goodness of His Father, for the salvation of us men.” He made it clear that Jesus did not just appear to be human. He was human. And that was necessary because without Jesus becoming human we would not have salvation. For in His dying and being raised to new life, we too are saved (Rom. 6). As the church father Gregory of Nazianzus argued, “That which was not assumed is not healed.” If Jesus had not become human, humanity would not be saved.

But Athanasius also equally argued strongly that Jesus was also fully God. He wrote of the “divine dilemma” — that God had to find some way to save man and restore the marred image in him. No one else could do it, neither the angels nor human beings; it had to be the original creator of the image of God in man who had to Himself come to the human race.

It was important that the Jesus who was born in Bethlehem was fully God and fully human. If not, we would not be saved, and our hope of salvation is in vain.

How then do we view Jesus this Christmas? Consider the new-born God-child. What is your response? The wise magi who came to see the new-born child did not fuss over Him, pinch His cheeks, and do all that we normally do when we see a cute new-born baby. Instead, Scripture tells us that “they bowed down and worshiped him”. (Mt. 2:11). They knew where He had come from. It is easy to forget that this baby was almighty God Himself! Perhaps our Christmases will be less noisy and more reverent when we remember this.

But He was also fully human (as Mary would have realised, having to feed and take care of her baby). He had to come as a human being. What it entailed will forever be a mystery for us. Paul hints at it when He wrote that ancient hymn of the church: “Christ Jesus: Who, being in very nature God, … made himself nothing, taking the very nature of a servant, being made in human likeness.” (Phil 2:6-7).

The late pastoral theologian Frank Lake suggested that Jesus was born the way we are all born so that from birth to death, and in between, He identifies with us, and comes to be present with us — to be our Saviour and divine-human Friend.

Why did He do it? The saintly Athanasius, echoing Jn 3:16, reminded us that “(t)his He did out of sheer love for us.” As we behold this mysterious God-child, we are reminded that He is fully God and fully human. There was no other way to save us.

Why did He do this? The answer is love — for you and me. Each of us must realise, as the leaders of the Reformation suggested, that Jesus was born pro nobis (for me). Christmas should also be a personal experience. What, then, should be our response as we celebrate Christmas?